In 1992, George H.W. Bush checked his watch during a nationally televised debate as if he had somewhere more pressing to be. And after winning a key early primary in 2004, Howard Dean did his best (and worst) Tarzan impression.

Those were bad. These are worse. Here are 10 crucial, cringeworthy campaign blunders. 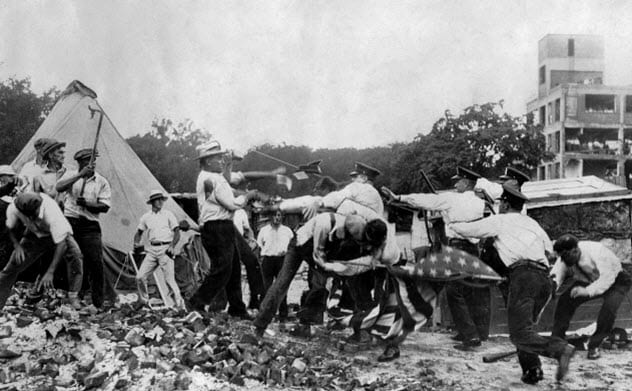 Republican Herbert Hoover may be America’s unluckiest president. The stock market crash of October 1929 happened less than a year into his administration, ushering in the Great Depression.

Millions lost their jobs, and in a time before social safety nets like unemployment benefits, many found themselves homeless. Shantytowns sprung up nationwide bearing a mocking eponym: Hoovervilles.

People were broke, and Hoover was portrayed as an impotent, do-nothing president espousing the virtues of self-reliance while the country spiraled. Worse, his Democratic opponent in 1932, New York governor Franklin D. Roosevelt, was promising a “New Deal” whereby legions of unemployed would be hired to build public projects like roads, bridges, and other infrastructure.

Hoover needed to do, well, something. So he killed World War I veterans for demanding their hard-earned combat compensation.

In July 1932, 17,000 US war veterans, many jobless since the Depression’s onset, gathered in Washington, DC, to demand early payment on bonuses that weren’t officially due until 1948. The group became known as the Bonus Army, and most found their request reasonable considering the calamitous economic circumstances.

Hoover’s response? He had the military fire on them, killing two. Hundreds more were wounded in the ensuing melee as the active army burned the Bonus Army’s encampment to the ground.[1]

Hoover lost in a landslide. Apparently, killing soldiers within shouting distance of the White House is an election year “don’t.”

8 Creepy Things Your Smartphone Knows About You

12 Things You Shouldn’t Be Cleaning with Paper Towels

7 Everyday Habits That Can Reveal Hidden Aspects of Your Personality